Personality. All individuals have one. Yet, what actually contributes to individuality? Although seemingly simple, personality frustrates evolutionary biologists due to its complex and convoluted nature. It is well established that personality can have important evolutionary implications (1, 2, 3, 4, 5), but determining a method to test the genetic underpinnings of personality has proven difficult. To avoid confusion, it’s important to establish exactly what “personality’ means. In an evolutionary context, animal personality is the expression of repeatable differences in behavior from other members of the population (6, 7). These differences can arise from many influences, both genetic and environmental. Variation in personality also includes both permanent differences in personalities (such as an aggressive or submissive nature) and temporary environmental effects that alter the expression of personality (such as aggression when provoked) (8,9). Drs. Ned Dochtermann and Andrew Sih (among many others) are working to determine how much of an individual’s personality is inherited through time, and the evolutionary implications for the heredity of personality (10).

It is extremely useful and helps to create repeatability when you can frame aspects of personality in a mathematical context. Here, this means observing the individual variations in behavior that can be compared to the components known to impact the phenotype. The phenotype is the outward appearance of the organism; in this case it is the observable behaviors making up the personality. This approach allows for the use of statistical tools to address questions about personality variation and, importantly, it increases the scope of questions that can be asked about personality and individuality. Fundamentally, this comes down to understanding what influences phenotypic expression, the process that generates variation within a population. Phenotypic variation comes from two main sources, genetic effects and environmental effects. Genetic effects can arise through differences in alleles (additive genetic differences) or interactions between alleles (dominance and epistatic effects). Environmental effects are either permanent (e.g. parental or epigenetic effects) or temporary (9). Total phenotypic variation is the sum of each of these four components.

Personality is a subset of phenotypic variation, summing only the additive genetic variance, dominance effects, and permanent environmental effects. Therefore, personality mathematically highlights the factors that impact the expression of a trait throughout the life of the organism. For instance, ‘submissiveness’ could be quantified by the amount of genetics shared with its parents, the interaction of the alleles influencing submissiveness, and any parental or permanent environmental effects that affect the expression of submissiveness. However even though the theory  is well established, the actual data collection is very difficult and work intensive.

However, thanks to these quantifying metrics, it is possible to investigate the evolutionary implications of personality through heritability. The heritability of a trait determines the degree of response exhibited by a population in response to a selection force. These forces can vary in strength and direction, and are the results of a variety of influences. If there is a strong selective pressure (for example, if it was very advantageous to have a submissive personality) but the offspring of submissive parents do not inherit that trait (their offspring’s submissiveness is not related to the parents), then the next generation offspring did not inherit that advantage. Mathematically, this is defined as the response to selection, which is equal to the heritability of the trait multiplied by the selection differential (pressure of selection). There are many ways to measure heritability, but in this case it is quantified by how much offspring resemble their parents. What Dochtermann et al. (10) aim to calculate is the heritability of personality, the relative contribution of genetic variation to the variation observed in personality. This can be measured by comparing the additive genetic differences within an individual to the amount of total phenotypic variation expressed by that individual for a particular trait (10). 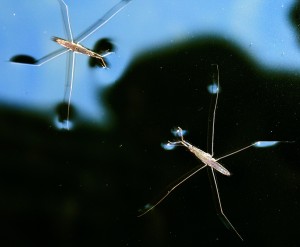 The heritability of personality is difficult to calculate because repeatability and heritability must both be estimated in the same data set. Repeatability refers to how likely the behavior is to be repeated and is very difficult to determine without the known genetic variation of each organism within a population. Depending on the design of the study or the limitations of the system, both repeatability and heritability can be very complicated to measure. Therefore, only a small proportion of studies were selected for meta-analysis by these authors (only 70 instances from 10 studies) (10).

Working with the available data, which spanned behavioral studies of taxa ranging from water striders and guppies, to house sparrows and red squirrels, Dochtermann et al. (10) found that 52% of personality variation is at the additive genetic level; meaning that more than half of the variation seen in personality has a genetic basis. Furthermore, these results add support to the idea that personality genes might substantially influence evolutionary responses (2). However, when different aspects of personality are evaluated individually, the results tell a slightly different story. According to the data, variation in aggression and anti-predator behaviors have the strongest genetic component, while foraging and mating behaviors show more variation and, consequently, less genetic correlation (see figure 1 for more details). These results are limited by sample size and significantly more research is needed to fully investigate the genetic influence on different  aspects of personality.

Genetic differences are likely to contribute to variation in animal personality, which meets one prerequisite of the phenotypic gambit: a component of behavior has a significant genetic correlation. The assumptions of the phenotypic gambit gain strength as the ratio of heritability to repeatability increases because the amount of variation expressed in the phenotype is more explained by genetic differences than environmental differences. Therefore, observations of these behaviors, especially aggression and anti-predatory behavior, can assume a genetic correlation. However, these results are not strong enough to show that the phenotypic gambit can be assumed in all instances (8, 10, 12)

Why are some aspects of personality more heritable than others? Dochtermann et al. (10) demonstrated this, but there is not enough data to draw conclusions as to why. It would be interesting to address the relative fitness of each personality. One method to do this would involve creating a controlled environment where each personality could be expressed in different relative frequencies. I would expect that each personality would respond differently depending on the population background in which it was expressed because of the value of cooperation in social environments. If cheating is favored in some instances (for example, one cheating animal in the midst of many non-cheaters) it might be advantageous. However, if that same cheating individual is in a population of mostly cheaters, then only the few non-cheaters will be rewarded (see “further reading‘ for more information on this subject). Work has been done in Andrew Sih’s lab with water striders to investigate how personality influences sexual selection and social choices when expressed in different frequencies (13). They have found that the background in which the personality appears is very important, but more research is underway to understand why (13).

Surprisingly, Dochtermann et al. (10) found that the heritability of behavior and personalities differ significantly (14% to 52% respectively); the complete heritability of personality is significantly greater than any individual aspect of personality. But what makes personality more heritable than behavior? I find it fascinating that Dochtermann et al. explain the difference as a result of temporary environmental effects (10). This implies that short-term impacts reduce the heritability of behavior but not personality as a whole, which makes me wonder about the flexibility of personality in response to rapid change. And, furthermore, how that flexibility impacts fitness during rapid changes and over longer temporal scales where these changes have become fixed (such as climatic shifts)?

As in most studies, this type of work tends in inspire more questions than it can answer. However, thanks to the work and dedication of these two labs, they are getting closer to answering questions about how and why personalities influence and constrain evolution.

15.) Groothuis  et al. 2008. Selection on personality in a songbird affects maternal hormone levels tuned to its effect on timing of reproduction. Biology Letters 4(5), 465-467.