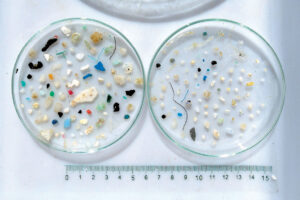 Over the last decade, plastic has become a more and more concerning source of pollution. In 2013 alone, almost 300 million pounds of plastic were produced worldwide (Lu et al 2017). Microplastics are defined as any plastic particle smaller than 5mm in diameter. Microplastics have been well documented as health concerns for marine life as more plastic accumulates in the ocean than any other place on earth. Additionally, microplastics have been found in a variety of household products including toothpaste and cosmetic products. We are just beginning to understand the extent microplastics have infiltrated our environment as well as our bodies, let alone the health risks they pose. One area of study deserving attention is the effect these plastics have on the microbiome of an organism. A microbiome is all of the bacteria, fungi, and viruses that live within or on a specific organism. Some of these microorganisms provide essential services to their host and maintaining a healthy microbiome has been tied to overall organismal health. Past studies have linked altered microbiomes to everything from obesity (Ridura et al 2013) to asthma (Stein et al 2016).  END_OF_DOCUMENT_TOKEN_TO_BE_REPLACED

The vaginal microbiome:  We live in a world of microbes, and yet we are still learning new things about these millions of ‘germs’ every day and how they influence us, but what about our children? New research suggests a mother’s stress during pregnancy could be another puzzle piece in the development of baby’s microbiome and brain. According to the CDC nearly 4 million children were born in the United States in 2016, which resulted in mothers giving their offspring microbes, whether the baby was born through c-section or vaginally. Recent research (Rutayisire et al., 2016) is starting to show that there may be an advantage to birthing vaginally, as young are exposed to their mother’s microbiome. END_OF_DOCUMENT_TOKEN_TO_BE_REPLACED

Type II diabetes mellitus is increasing at an alarming rate, especially in children. According to the World Health Organization (WHO) statistics, the number of individuals with type II diabetes is projected to rise to more than 590 million by the year 2035 (Diabetes, 2017 and Upadhyaya, 2015). Type II diabetes is the result of the body’s resistance to insulin, a hormone that regulates blood sugar. The WHO states that type II is largely the effect of being overweight and very little exercise. Type I diabetes is distinguished by the bodies inability to produce insulin and there is no way to prevent it. Symptoms of type II diabetes include thirst, constant hunger, weight loss, vision loss, numbness in feet, and tiredness (Diabetes, 2017).  Scientists are trying to discover new ways to mediate the effects of type II diabetes and many think that the gut microbiota of the human body might correlate with diabetes in an interesting way. END_OF_DOCUMENT_TOKEN_TO_BE_REPLACED

Background:  Can leading a simple traditional life correlate to health in non intuitive ways such as acting as a buffer against the development of asthma? Recent studies have shown that asthma is less prominent when microbial diversity is high (Genuneit, 2012); this trend has been observed in children involved in farming (Mutius,2010). Genuneit demonstrate that children who are exposed to farming have a 25% decreased chance of experiencing asthma (Genuneit, 2012). Logically it is sensible that the diversity of microbes would be higher in children exposed to farming, with all the dirt, hay and animals that comes with it, than children who are not exposed to that environment and live in more consistent sanitary lifestyle. In other words the diversity of a bacterial community across subjects (farm children vs. non-farm children) is much higher in children exposed to farming than those who were not. But how is such a phenomenon achieved? END_OF_DOCUMENT_TOKEN_TO_BE_REPLACED