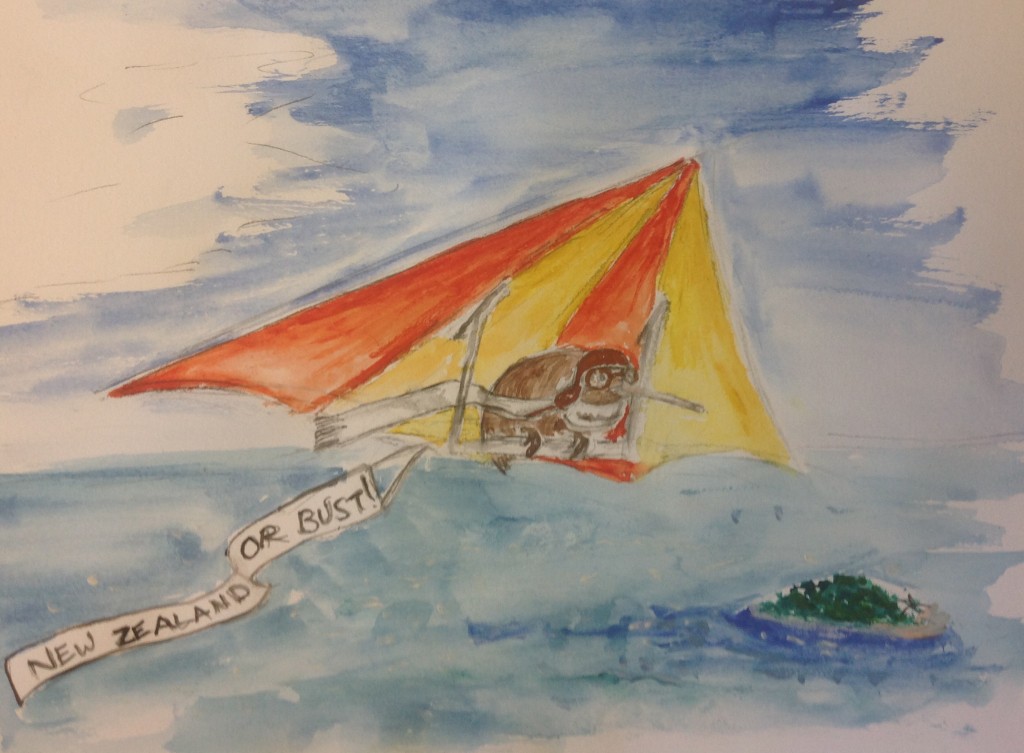 At some point in elementary school– maybe third or fifth grade– your teacher likely pulled out a chart showing maps of the world throughout geological history, showing all the continents cozily squished together for a while as Pangea before they all started wandering off on their own. You probably traced the routes they took, noticed how South America and Africa seemed to fit together like puzzle pieces, and probably sat through an explanation involving dinosaur and fern fossils found throughout the Southern Hemisphere and an unlucky German weatherman who was unfortunate enough to be the first person to seriously suggest that the continents moved around throughout time. At some point, if your class was anything like my fifth grade science class, the teacher probably got into more detail about what all this continental rambling about meant for the plants and animals still around today- that all the fantastic and weird marsupials of Australia and the lemurs of Madagascar came to be because those two landmasses left the Gondwanan party early, before the more typical mammals took over, and that certain animals were found on all of the different continents of the Southern Hemisphere, distant cousins who all rode the bits and pieces of the former southern supercontinent to their current positions. At this point, in all likelihood, somebody brought up ratites.

Just to refresh your memory: ratites are an ancient group of flightless birds found throughout the Southern Hemisphere, who have been flightless for so long that their feathers have turned into tassels of fluff useless for creating lift, their wings have atrophied while their bodies have become huge, and the sternum– the bone in the chest– has lost its keel, a bony projection vital for the attachment of the enormous muscles needed to fly. Some ratites are familiar- the ostriches in Africa, the emus and cassowaries of Australia, the kiwi bird of New Zealand, and the rheas of South America- while other are less familiar–the extinct elephant birds and moas of Madagascar and New Zealand, respectively (Figure 1). Another important member of the cast of characters is the tinamou–a smallish (compared with its cousins) bird of South American grasslands which shares many of the archaic skeletal characteristics of the ratites but is still somewhat capable of flight. All of these together– ratites and the tinamous– make up the paleognaths, the “old jaws’ (referring to features of the palate lacked by all other extant birds), a lineage basal to the rest of the 10,000-odd species of birds in the world (1).

The paleognaths have long been the textbook example (2, 3) of a biogeographic phenomenon called vicariance– in which species evolve in place, to the point that they even, like in the hypothesized origin of the ratites, come along for the ride as the landmass they call home drifts away, quietly adapting to the local environment separate from other lineages. This is in contrast to the process exemplified by those other avian evolutionary poster children, Darwin’s finches– dispersal, where an organism somehow travels from one place to another and, upon arrival, starts adapting to the local conditions, even radiating out into numerous species, like the finches in the Galapagos. The origin story thus constructed for the flightless ratites went something like this: once, about 80 mya (give or take 10 my) there was a paleognath bird somewhere on Gondwana. This bird could fly originally, but at some point along the way, one group of these ancient paleognaths began to lose their ability to fly (4). Just what the selective pressure was isn’t known– possibly an abundance of open, arid grasslands made running instead of flying advantageous. The modifications needed to fly are energetically expensive to maintain; huge pectoral muscles and the large bony sternum take a lot of energy to maintain. Unsurprisingly, then, birds have repeatedly become flightless (5), usually in situations where predators were few. So, at this point, the flightless paleognaths– let’s call them the proto-ratites– started down their own evolutionary pathway, while the flighted paleognaths (the proto-tinamous) went on their own way. While the proto-ratites presumably were pretty good at running around, and started diversifying into other habitats, they couldn’t get across water very well, so when Gondwana started to break apart, the proto-ratites were stuck on whatever landmass they ended up on. They continued adapting and evolving, each separated from the other, eventually becoming the groups known today that were described above. The flighted paleognaths- of which there were multiple groups- started to lose ground to modern birds, leaving only the tinamous on South America (1) (Figure 2). There was morphological evidence to back this story up (6, 7). It was a simple, neat hypothesis, which managed to both explain the diversification of large, flightless birds across a considerable portion of the Earth’s landmasses while nicely illustrating several principles of evolution, biogeography, and the history of planet Earth.

So, of course, someone had to go and ruin it.

Last year, a team based in Australia reached a rather surprising conclusion: kiwis are most closely related, not to moas, as the previous model had supposed, but to the elephant birds of Madagascar (4). This was only the latest piece of evidence that the previous model wasn’t telling the real story. Previous work had already determined that moa were most closely related to tinamous- the flying South American paleognaths (5, 8, 9, 10, 11), while multiple studies have recovered ostriches as the basal lineage to the other paleognaths [citations]. Some of these relationships are particularly problematic for the older model. For instance, dates on the divergence of the elephant birds and kiwis range from 45-60 mya. Even though the exact dating of the various divergence events within the paleognath lineage is fairly shaky (4), this date is still problematic. Africa and Madagascar were the first parts of Gondwana to split off, somewhere around 100-130 mya; they have never had a direct connection to New Zealand (4). Additionally, New Zealand split off around 60-80 mya, although the exact timing and nature of the split is still disputed (10, 12). This puts even the rough 95% confidence interval–the statistical range where, if you ran the same calculations over and over again, the range would have the true date of divergence 95% of the time– estimate of the elephant bird-kiwi split well after the separation of Madagascar from Gondwana, and the mean estimate of 50 mya is after even New Zealand’s split (4). The likelihood of an already flightless proto-kiwi-elephant bird getting from one place to another after these splits through forms of passive dispersal- say, rafting on some debris or getting caught in a storm- is, to understate it a little bit, extremely low.

Meanwhile, there’s also that uncomfortable moa-tinamou clade to sort out. This clade fits squarely into the middle of the “ratite’ tree (Figure 3). While the repeated evolution of flightlessness is known within birds, the evolution of flight after it has been lost is unknown (5). This leads to the likely scenario that the most recent common ancestor of the moa and tinamou also likely could fly. Furthermore, since the moa-tinamou clade fits so comfortably in the middle of the paleognath phylogeny, it’s therefore likely that many of the other “ratites’ could also fly much more recently than previously thought (4, 11).

If you’re the type of person who is bugged by inconsistent punctuation, you probably are wondering why I’ve started putting “ratite’ in quotation marks in the past couple of paragraphs (or, more likely, clenching your teeth and muttering about people who can’t be consistent with their use of punctuation). There’s a reason for the change, though. Recall that at the beginning, we defined ratites as a clade of large, flightless birds, which are most closely related to the tinamou- which is not a ratite. However, since some of the birds we’ve been characterizing as ratites are more closely related to tinamous than they are to other “ratites’, this means that “ratite’ is, in fact, not a valid grouping. A clade should be monophyletic- meaning it contains all of the descendants of a common ancestor. However, since tinamous are not ratites, but are descended from the same common ancestor, the “ratite’ grouping is paraphyletic- it leaves out some of the descendants of the common ancestor (Figure 4).

All of these pieces of evidence lead to a question: what does all of this mean for the history of paleognaths? First of all, it means that the ancestors of today’s “ratites’ lost the ability to fly not once in the distant past, but more likely repeatedly, in different places and likely over the span of millions of years (4). This, combined with the evidence of clades like the elephant bird-kiwi or the moa-tinamou, composed of lineages found on completely different continents, means that the ancestral paleognaths weren’t stuck as passengers on drifting landmasses, but could probably disperse between them (Figure 5). Finally, there’s the matter of the how the existing “ratites’ all followed such similar evolutionary paths. The selective pressures led to the repeated evolution of large, flightless, cursorial birds- pressures which reoccurred across an entire hemisphere- are hard to reconstruct after such an enormous time span, and the feasibility of figuring out what exactly happened is pretty limited. But it’s a compelling question- probably more interesting than the original vicariance model. Even though the “ratites’ can’t be used as a textbook example of vicariance, paleognath evolution may just still have a future as a poster child- this time, of convergent evolution.