Human settlement has typically meant one thing for large carnivores: certain doom. Both people and predators rely on large tracts of land for habitat and other animals for food, and intensely compete for these resources. Europe is an example of a human-dominated landscape almost devoid of large predators. A diverse community of animals that are used for food (prey), such as roe deer and wild boar, have healthy populations regulated by hunting rather than predation by historically native carnivores such as brown bears (Salhen et al. 2016). Prey species use a variety of methods to detect predator presence, but a very common way animals do this is by scent (Apfelbach et al. 2005). If a deer detects a predator’s scent, they will change their behavior to escape. These abilities may fade over time if predators disappear from the landscape, as the ability to detect predators would no longer be part of the animal’s early learning. Due to conservation efforts, large carnivores are going through a sort of revival in Europe (Sahlen et al. 2016). Predators are recolonizing areas that they have been absent from for centuries. The increase in predators in Europe is a conservation success, but how will this affect prey populations? Without experience escaping from these predators, will they be obliterated?

What happens when a predator recolonizes their habitat?

A new study by Salhen et al. (2016) exposed various prey species, such as fallow deer and wild boar, to predator scents in a predator-devoid landscape in Southeastern Sweden. By introducing the scent of a historically native, but locally extinct predator, the scientists measure the antipredator response of moose, fallow deer, roe deer, and wild boar to assess if they have conserved the ability to detect brown bears, which they haven’t been exposed to for centuries. The researchers applied the bear scent at artificial feeding sites and used game cameras to capture the behavioral response of the prey species in terms of number of visits to the feeding site and the level of habitat protection (how “open’ an area is) at the sites frequented or avoided.

They found that all the prey species changed their behavior in response to the brown bear scent–they generally used open areas rather than forested areas, and reduced the number of visitations or reduced the visitation duration to plots with carnivore scents. Deer likely display this behavior because open habitats allow deer to run away if approached by a predator, rather than being impeded by trees in dense areas. This study demonstrates that not all behaviors are learned–these prey species are responding to a stimulus that they have never been exposed to. If European prey species have a “fixed’ ability to detect predators by scent, the recolonization of predator species would not have the expected drastic impact on prey species.

The genetics of it all

To understand how this can be conserved in the population centuries after it was fixed, let’s look at it in a slightly more genetic sense. Fixation is the change in a gene pool from a situation where there are at least two different forms of a gene (“allele’) to where there is just one–so all individuals have the same form of a given gene. Consider a simple situation in which the ability to detect predators by scent is controlled by one gene, with alleles A (can detect scent) and a (cannot detect scent).

For demonstration purposes, we’ll start out at a low frequency of allele A and  let’s assume 100% of individuals that have allele A survive and only 25% of individuals with allele a survive when encountered by a predator. 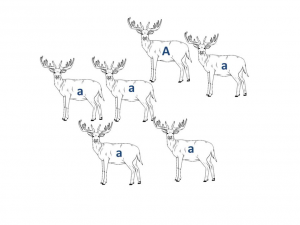 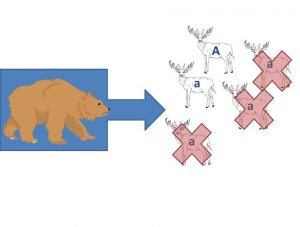 Each individual that survives produces 2 offspring, and the allele is passed on.

Even with a low initial frequency of “scent detection’, after just a few generations under this strong survival pressure our imaginary population has reached allele fixation. All individuals now have allele A, and will pass this allele onto their offspring, so the population will continue to only have the A allele. Depending on how strongly the allele is favored, this process can take as little as one generation or millennia.

If an ability is fixed, can it ever change?

If the large carnivores never return to a given area, the ability to sense them is kind of useless. Once an allele is fixed, the only way another genetic variant is introduced into the population is by mutation. Previously non-existent alleles can arise from “mistakes’ in the copying of genetic material in meiosis (the production of eggs and sperm). These mutations may rise in frequency in the population by random chance or positive selection, if the mutation is beneficial to survival and/or reproduction. Fixed alleles that remain beneficial for individuals in their habitats are likely to stay that way, as selection would favor conserving that gene against mutations.

Almost everything comes at a cost– the ability to detect predators may demand energy otherwise allocated to other life functions. In this experimental design, the researchers may be able to assess this–how does the fitness differ in individuals exposed to predator scent and those who are not?

The findings laid out in this paper also invoke  further questions: Is the ability predator-specific? Is this a coevolutionary arms race in which predators have adapted behaviors to counter the prey’s detection ability? How long has this allele been fixed? These questions have not been answered yet, so keep your eyes on Salhens crew for updates.

This understudied phenomenon, in which predators recolonize lost habitats, can reveal ecological and evolutionary patterns and processes never looked at before.    Innate predator avoidance is an important evolutionary response of inexperienced prey because it can buffer them from being decimated by predator recolonization.  With increasing wildlife populations across Europe, it is crucial to understand the dynamic relationships between species.

If the fixation of alleles, or just natural selection and evolution in general excite you, here is some further reading: