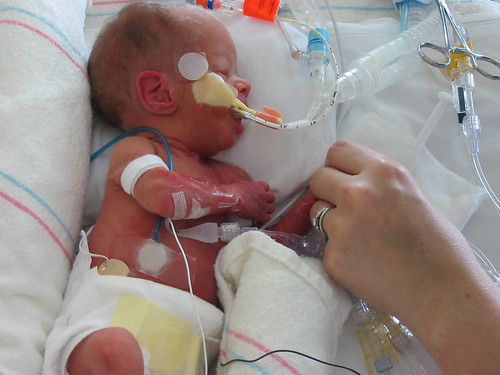 Medicine is advancing faster and faster. Babies born at 23 weeks, only 3 weeks past the halfway point of a full term pregnancy, have a 17 % chance of survival, and if they are born just one week later their chances jump to 39% (preemies survival). While there is a greater chance of survival for these babies than ever before, another statistic is also growing, according to the World health organization the number of premature births has increased worldwide. Approximately 15 million babies are be born before 37-week gestation each year, and almost a million of them die as a result. While many of these deaths are tied to lack of medical care in unindustrialized countries where the premature birth rates are extremely high, there are still risk factors for those receiving even the best of care (WHO, 2015). The lungs, brain and digestive tract of premature infants are all underdeveloped, leading to severe and sometimes life long complications; one of these complications is necrotizing enterocolitis.

Necrotizing enterocolitis (NEC) is the greatest cause of illness and death in the neonatal intensive care unit (NICU) related to the gastrointestinal tract (Gephart et al., 2012). NEC is an infection of the bowel wall that leads to tissue death and possible proliferation which can lead to sepsis, lifelong GI problems and in severe cases death. NEC does not have a known cause, but premature birth and formula feedings are known to be risk factors of the disease according to the Children’s Hospital Los Angeles (CHLA). NEC is also an expensive disease to treat accounting for, as much as 20% NICUs costs annually as it requires extensive treatment and extended hospital stays for patients. The microbial community of NEC patients has been shown to be different than the bacterial community of the gut in healthy neonates suggesting abnormal colonization is another potential cause of NEC (Stewart et al., 2013). If the disease is caused by specific strains of bacteria, identifying them and could lead to a reduction of NEC causes not only saving resources, but more importantly saving lives

The microbiome of infants has been widely studied in order to understands how the microbiome develops. The development of your microbiome is affected by your route of birth (vaginal vs. C-section), whether or not you where breastfeed, and countless other factors (Palmer et al., 2007). While we know now that there are many things that affect our microbiome, particularly those of our guts, we are only beginning to discover what that could mean for our health, beginning in infancy and continuing throughout our lives.

Do twins hold the answer?

Twin studies are used in an effort to identify if there are some underlying genetic effects on the microbiome. These studies look at sets of twins due to their genetic similarity to one another, studies with monozygotic, or identical twins, are particularly insightful since they share the same DNA making them “natural clones’ allowing for the study of the effect of the environment without the genetics being a factor. twins are also usually raised in a near identical environment, which can be helpful in some studies, but in the case of studying the microbiome this can lead to confounding factors for interpreting the similarities seen in the microbiomes of twin pairs .  While twin studies may not be as helpful with deciphering the genetic relationship with the microbiome, they can still be used to study the effects of specific characteristic of the microbiome such as relation of an abundant genus to an illness. This has been done with NEC in a study by Stewart et al. (2013).

Stewart et al. (2013). studied stool samples from 12 preterm twin pairs and 1 pair of preterm triplets as well the expressed breast milk feed to them to investigate how the gut microbial communities in preterm infants develop over time in comparison to the microbial community of their twin and of the expressed breast milk from their mothers?  The authors also looked for any change in the microbiota of a twin with necrotising enterocolitis  in comparison to the healthy twin, in an effort to isolate potential causal factors from the disease.

By analyzing all of the data, they were able to determine that twins were likely to have a more similar microbiome to their sibling than to any other preterm infant, even other sampled individuals sharing the same environment of the neonatal intensive care unit (NICU). They also determined that the core of the bacterial community found in the samples could be paired to the bacterial community in the analyzed breast milk. The researchers then took a closer look at one of the twin pairs where only one of the twins got NEC.They analyzed the entire bacterial community to the genus level and found that there was a decrease in diversity in the sick twin with an elevated level of Escherichia sp., which are pathogenic bacteria with an association to inflammatory disease. There was not enough information in this study to definitively state a direct correlation between any one bacterial strain and NEC in preterm infants but it did give a direction for further study.

As NEC is one of the leading cause of death in preterm infants, being able to detect a change in the bacterial community and start treatment  before onset of disease  or before the already susceptible patients get any sicker would be a real game changer in the care of neonates. Probiotic treatment may be another way to help the delayed microbial development in preterm infants and prevent NEC since a decreases in the diversity was shown before the onset of disease in this study.

What can we gain?

What could identification of the causal factor of NEC mean for the health of neonates? Further studies of the microbiome before onset of NEC would have to be done in order to determine if lack of diversity was a cause or a symptom of the disease and what treatments would help, but potentially microbial treatments could be used to counter the unfavorable colonization of pathogenic species and restore diversity. Treatments that are simple and cost effective could have an effect globally on the health of the world’s smallest and most vulnerable. Probiotics as a treatment for NEC could potentially stop the disease before there is a need for a lengthy stay in the NICU, or reduce the severity of the disease.

A paper about the use of probiotics to reduce the occurrence of NEC in rat models was done in 1999, a long time before the sequencing techniques used today (Caplan et al., 1999). Papers like this one give great background to build off of for further study especially now that we can take a closer look at how these probiotics affect the microbial community and in turn help prevent disease. If you are looking for more information on the microbiome as a whole and how microbes affect your daily life check out Follow your gut: the enormous impact of tiny microbes by Rob Knight for a fun introduction.