Hepatitis C virus (HCV) infection is a liver infection that is a worldwide major health problem. According to the World Health Organization (WHO), they estimated approximately 71 million people in the world with chronic HCV. In this blog I will be focusing more on chronic HCV and how it affects our gut microbiome. There are many different genotypes of the virus, and sadly there is still no pre-exposure prophylaxis available to this day but there is currently much research being done on HCV (CDC, 2018). Following the chronic infection, most people will develop cirrhosis or liver cancer. A large portion of the people who die from HCV die because they have already entered the terminal stages of cirrhosis or hepatocellular carcinoma. Cirrhosis is a serious disease that occurs once liver cells are damaged with scar tissue, when the organ starts to fail the patient will die unless they receive a liver transplant (CDC, 2018). Hepatocellular carcinoma is a type of cancer that is correlated with hepatitis C virus, hepatitis B virus, heavy drinking, iron storage diseases or aflatoxin (CDC, 2018). The most common sources of HCV infection are by injection drugs, using contaminated needles, and transfusions of blood that has not been tested for blood pathogens. Throughout the years there has been a significant amount of research on the role of gut microbiota in non-alcoholic fatty liver disease and liver cirrhosis, but there is not much research on chronic hepatitis C and the human microbiome. This is because most of the other research focuses on how alcohol affects the liver.

GOAL of the paper:

Authors Aly et al studied HCV and performed a research study which was conducted in Egypt, where HCV has the highest prevalence in the world (Chaabna et al, 2016). The central goal of this study was to see how chronic hepatitis c virus infections alter the makeup of the gut microbiomes. By observing and understanding the differences in the patients gut microbial community composition to learn the impacts between the patients liver states (Chaabna et al, 2016). The ultimate goal was to investigate differences in the microbiome constitution between the patients with stage 4 chronic HCV and the healthy control patients. 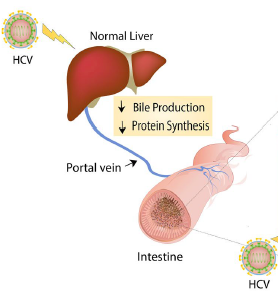 Even though different alpha diversity tests were used, the results all showed the same that healthy individuals microbiota had higher alpha diversity. The consistency in the different test results indicates the high reliability of the results. Furthermore, the results are also supported by other research which found that chronic inflammation will decrease biodiversity in different microbiome locations (Aly et al, 2016).

The operational taxonomic unit (OTU) is used to classify groups of closely related in individuals. In this study, they found 22 OTUs that were the same among the gut microbiome of the chronic HCV patients and healthy patients (Aly et al, 2016). This is important because core OTUs are essential in understanding complexity of the microbiome since these commonly occurring taxa are critical to how the microbial community works.

Among the chronic HCV patients, there was an increase in Bacteroidetes, Acinetobacter, Veillonella and Phascolarctobacterium. On the other hand, healthy patients had an increase in Firmicutes, Ruminococcus and Clostridium. Overall, the genera Prevotella and Faecalibacterium were found more abundant in patients with HCV. Knowing these difference in the phylum level is important because it provides a baseline for future research to go more in depth and study each of these phylum in correlation to HCV patients. Chronic HCV patients showed less microbial diversity in their gut community compared to the healthy individuals which had higher microbial alpha diversity (Aly et al, 2016). These findings are in agreement with other microbiome studies from previous years (Hanafiah et al, 2013). The lower microbial diversity in the intestine of chronic HCV patients could have been caused by several factors such as interruption of homeostasis (the ability to maintain a stable internal environment even when there is change occurring) or dysbiosis (microbial imbalance) in the intestine of chronic HCV patients.

The first time reading this paper, I was concerned they didn’t sample any females, but in their conclusion they overextended and made broad assumptions for the whole population. I realize the study was performed in Egypt and there could be cultural reasons as to why females were not included in the study. Also, since Egypt is one of the countries with higher rates of chronic HCV, why didn’t they test more patients? With a larger patient sample size, the conclusion are able to be better supported. Was it because of money purposes? Or could it be because it was a side project they were doing and they happened to obtain results and publish them. It was mentioned that out of the 7 original chronic HCV patients, one failed the quality control while the samples were running. The paper had very limited information about why one of the controls failed and I think they should have expanded on what could have affected this.

For future studies, it would be interesting to use animal models such as rats to see how their gut microbiomes are affected by chronic HCV. Using an animal model would be beneficial because we could follow through how it affects them and then do another prospective case control study with humans. Even though they used the data from American Gut samples, I would also have liked to see this study recreated in the United States because we also have a large amount of people living with chronic HCV. It would be interesting to see if the genotypes of HCV in the U.S. affects chronic stage 4 HCV at the same rate as in Egypt. Approximately 75% of the chronic HCV population in the United States are genotypes 1a or 1b whereas most of the Egyptian population has genotype 4 (CDC, 2018).